Strangest sports you can bet on

Sports betting is one of the largest industries in the world, with fans from all different types of sports placing bets. Recently, fans of golf got to place some bets on US Masters betting sites as they tried to predict who would win the tournament. Most mainstream sports are available to place bets on most sports betting sites, but there are some uncommon and strange sports that are available to bet on at certain times of the year that might surprise you.

Everyone is familiar with chess and everyone is familiar with boxing, but very few will be familiar with chess boxing. The hybrid sport combined the strategy of the chess board game, with the physicality of boxing. A chess boxing fight consists of 11 rounds – with 6 rounds of chess and 5 rounds of boxing. The chess and boxing rounds alternate with the first and last round being a round of chess. Despite being a relatively new sport, chess boxing has quickly developed into a fully developed competitive sport with major organisations in the United Kingdom, Germany, India, and Russia.

Pesäpallo, also known as Finnish baseball, is considered Finland’s national sport. The sport is very similar to traditional baseball with teams taking turns at batting and running bases as their opponents try to get them out. However unlike baseball, the pitcher throws the ball in the air vertically at the home base and backs away as the batsman goes to hit it. These rules means that offense has a slight edge due to the batter having more control in deciding where the ball is going to be placed. This even leads to a more strategic and tactical game with both teams forced to predicts the offensive and defensive plays the opponents could make.

If you’re looking for one of the most hectic sports in the world then there is no better place to look than Sepak Takraw. The sport, which is also known as kick volleyball, is a combination of volleyball, football, martial arts and gymnastics. As the sport takes inspiration from all these sports and requires the athletes twisting their bodies in crazy ways in order to hit the ball with only their feet, the players must have very good technical ability and fast reactions if they are to compete at the highest level.

Although the sport has been around for centuries, it didn’t start gaining popularity until the 1960’s when a standardised set of rules was created. The sport is one of the highlights of the Asian Game and Southeast Asian Games, and is predominately played in Asia. However the sport is rapidly growing in Europe, Australia and the United States meaning it could be a mainstream sport in the near future. With the Asian Games taking place this year, fans of the sport will be able to place bets on the winners of the Sepak Takraw tournament. 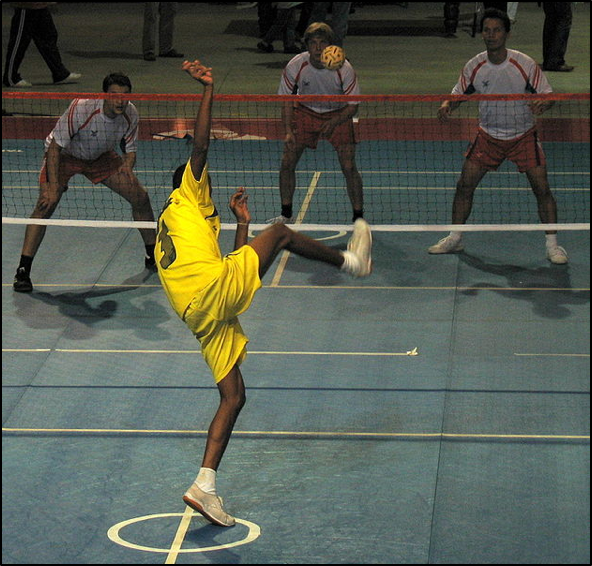 A game of Sepak Takraw in action (source: wikipedia.com)

Bossaball is a team sport that originated in Spain which incorporates elements from games such as volleyball, football and gymnastics. The sport also incorporates music. Bossaball is played on an inflatable court with a trampoline on either side of the net. This allows players to bounce high enough to spike the ball over the net and score points. Due to the height of the net, only the player on the trampoline is able to ‘spike’ the ball once they have gained enough height. The fact that each team are only able to touch the ball 5 times before it is ‘returned’ to the other team means that the game runs at a fast pace. As mentioned earlier, music also a key component of a Bossaball ‘show’. Although the referee’s primary responsibility is overseeing the game and making calls, they also serve as the “Master of Ceremonies” with the help of a whistle, microphone, percussion instruments and an exotic DJ set.